To each his or her own, they say. While I totally get the CUV craze, I’m going to stick to my station wagons, as long as I can… Yup, it’s come to this. A few things have happened recently, one of which both surprised and spooked me.

In a nutshell, my far better and prettier half used to dabble in car reviews, is a car-nut herself and hopes to one day return to the business. It is with this in mind that she regularly samples my loaner cars. One morning, she took our son to daycare in the Expedition and as I watched them drive off, I felt a sense of calm, serenity and security knowing they were both onboard this giant super-tanker of an SUV.

That exact feeling, coupled with the all-important raised driving position and more interior room than the average Canadian home, explains why large trucks are as popular as they are.

The all-new 2018 Ford Expedition is now more upscale-looking than the previous generation nearly identical Lincoln Navigator twin. Regardless of trim, the Ford’s grille with integrated headlights is striking, sometimes in a good way, sometimes not. I think lower trims like the XLT have it better. The opposite is true when it comes to wheel sizes and exterior trimming. 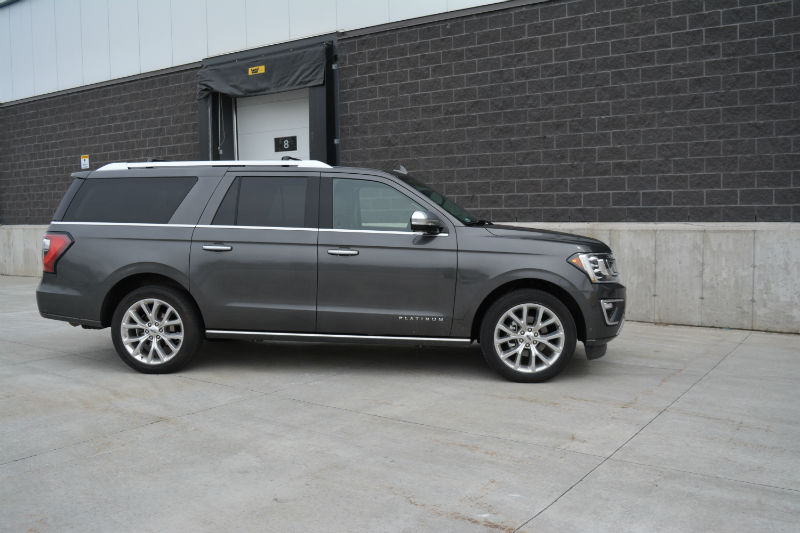 There isn’t much to be said about styling per say on these rolling buildings. They have a job to and are essentially single-purpose vehicles. Ford’s opted for a crease here and there, a character line up top, and that’s it. The FX4 package might be the “cooler-looking” Expedition. In the end however, the new Expedition is handsome.

The cabin is a cross between what Ford does very well in its full-size trucks, which this is, and the remainder of its crossover lineup. Ergonomics and design are split on the bulky dash. The controls are fairly straightforward however those located above the central screen are quite nearly out of reach for most. Ford has done a commendable job with the multiple surfaces and textures.

I can tell you first hand that 8’ long objects fit easily in the Expedition Max’s boot. Had I not been driving a Max, my transportation of long objects would have failed. The Max is 30cm longer than the regular Expedition which translates in in roughly 450 litres more boot volume. With the 3rd row in place, the Max will swallow 1,000 litres of stuff. Behind the 2nd row, it can take on up to 2,254 litres! And behind the first row, your neighbour’s Toyota Corolla. If this is not enough cargo volume for your activities, you must either question your life choices, or purchase a semi and a 53’ long trailer. 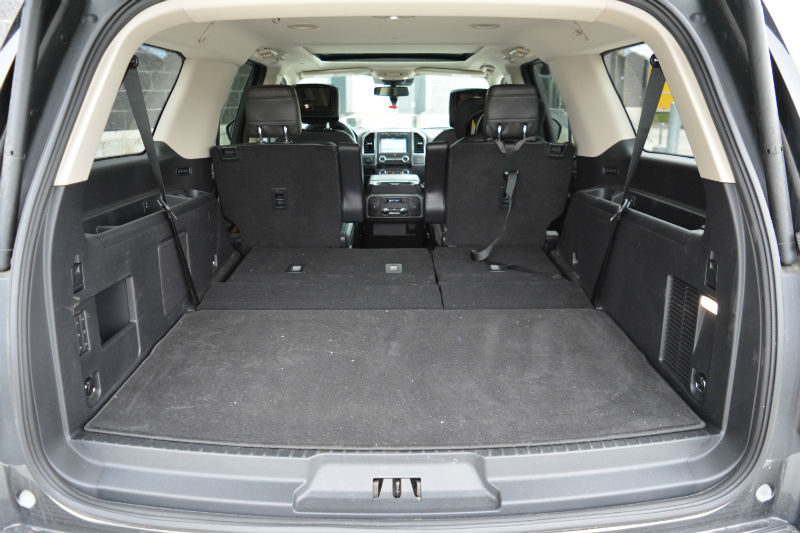 Access to the 3rd row is easy and with the 2nd row seat set properly, there’s a decent amount of room even for an adult. The 2nd row is great. As tested, my Expedition Platinum Max featured the captain seats which are ideal for baby seats and normal humans.

The front seats in the Platinum are 10-way power adjustable with lumbar, heated, ventilated and massaging. This is the spot I’d want to be in when covering thousands of kilometers. There are countless numbers of cubby holes and spots for all our favorite carry-on items.

Base price for the 2018 Ford Expedition is of $60,149. There’s but one powertrain with the truck which consists of the 3.5-litre EcoBoost V6, 10-speed automatic transmission and AWD. The Limited adds the wonderful power running boards, high-end leather and more and starts at $73,149. 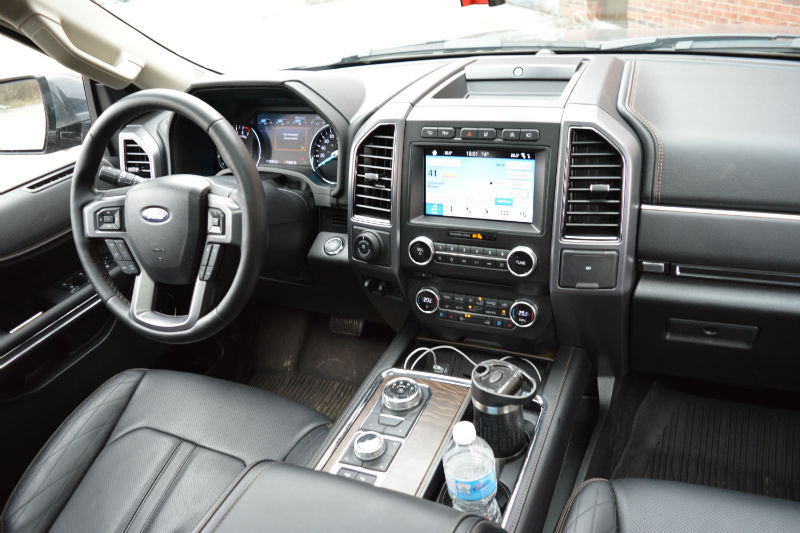 The Platinum tips the price scale at $81,349 thanks to its extra cameras, huge panoramic sunroof and more. Moving to the Max raises the price by $3k and as tested, with the rear entertainment system and 2nd row buckets, the sticker price is just shy of $90,000.

At this price point, you get Sync3 included, along with B&O PLAY Premium audio system with 12 speakers, heated steering wheel, head’s up display, 360-degree Camera, active park assist, intelligent cruise control, and much, much more.

The Chevrolet Suburban Premier with options is as close one can get to the Expedition Platinum Max. Despite its age, the Chevy looks better and has a column shifter. For all other reasons, the Ford wins.

As I dug through Ford’s Canadian website for specs, I found many mistakes. One of which is the torque output for the 3.5-litre EcoBoost twin-turbo V6. While the horsepower output of 400 at 5,000 rpm is correct, the torque figure is 480 lb.-ft., and not 380, from 2,250 rpm. The non-Platinum trucks make due with 375 and 470 respectively, at least according to the far less confused American website. 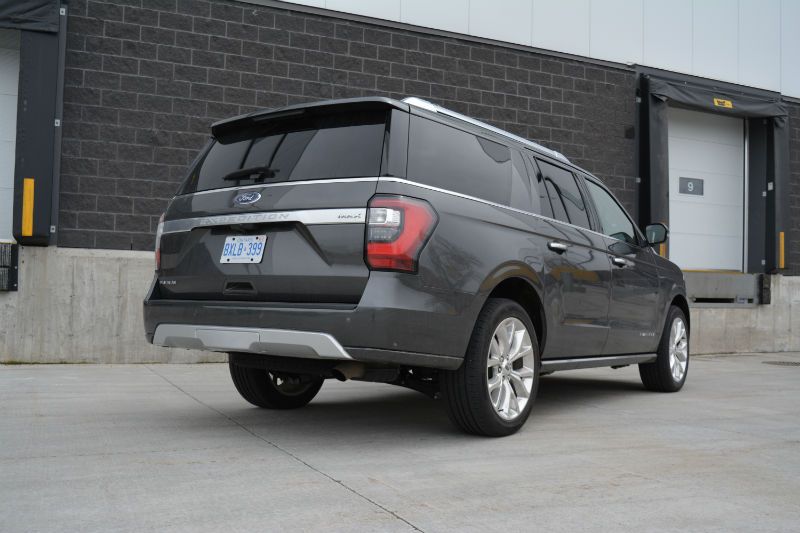 It is difficult to mask the Expedition Max’s exterior dimensions and weight. Ford’s done its absolute best in order to dim its size with a fully independent suspension consisting of Continuously Controlled Damping (CCD). The result is a mix of comfortable cruising and sense that all is under control from the driver’s point of view.

The EcoBoost has lots of work to do to get the 2,650 kg (5,830 lbs.) truck going but it does so with confidence. The gobs of low-end torque guarantee forward momentum and I have much praise for the transmission. It’s nearly seamless and always in the right gear. Only once did it hiccup and bang into a lower gear when I put the throttle down to pass.

The ride quality is beautiful. The long wheelbase, large wheels and tires along with the CCD control body movements just shy of floaty. No matter the road surface, the truck behaves regally.

My only qualm with the driving experience comes from the brake pedal. The pedal cluster is power adjustable and while I’ve driven numerous Fords quipped as such, this was the first time I noticed a pendulum/switch effect upon pressing on the brakes. I got used to it, but it made progressive braking difficult at first.

There isn’t much to be done about fuel economy with such a vehicle. I averaged roughly 15L/100km which is to be expected, and very similar to the numbers you can expect with a GM truck equipped with the 5.3-litre V8 and the 6-speed autobox. About the GM, the arrival of the all-new Silverado and Sierra mean that new GM full-size SUVs are not that far off. At the moment, the Ford’s got it but if you don’t need one now, I’d wait and see.