The QX80 Monograph concept showcases a potential design direction that Infiniti’s next mega SUV might look like. From the pictures, and seeing it in person, we can almost point out the few elements that won’t make it to production. In other words, it almost looks as though it’s ready to roll off the assembly line. 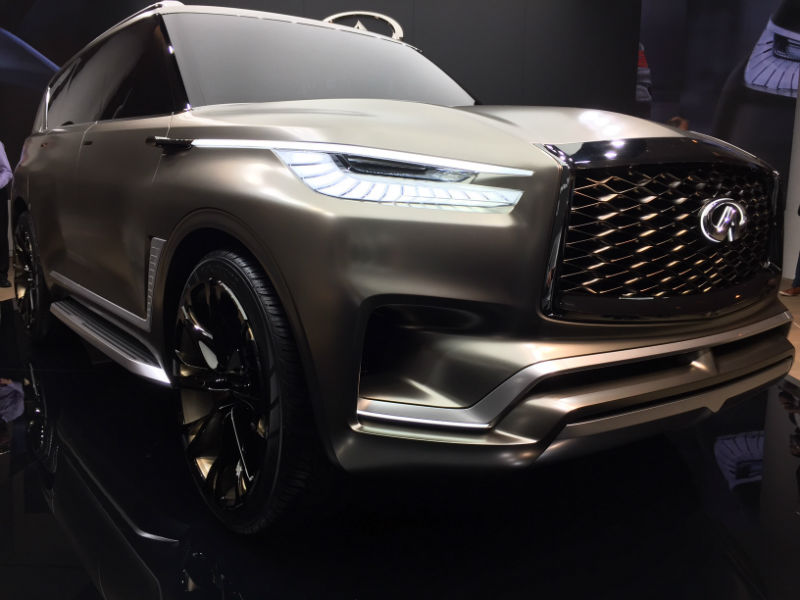 Although the QX80 Monograph is only a concept, a number of visual styling cues are familiar, and a number more will become so as the years go by. The iconic fender vents are present and well integrated. The same goes for the human eye signature headlamps that have become an integral part of Infiniti’s modern-day face.

Said headlamps have evolved, however, as they now extended and wrap around the front corners of the massive hood and crawl along the front fender. They, combined with the redefined double-ach grille, create the illusion that this QX80 is the width of an aircraft carrier.

Truth be told, the Monograph is enormous. It is more than five meters long and with the roof rails, it scrapes the clouds at nearly two meters in height. About the width, the illusion is almost real as this luxury large SUV is more than two meters wide with the door mirrors folded. Speaking of big things, the 24” wheels look like 26s as outer edges of the wheels overlap the tires.

Infiniti’s Atsugi, Japan, design studio penned this vehicle as their ultimate expression of futuristic luxury SUV design and we think they’ve done a fine job. It is difficult to define the truck as handsome – we think striking fits better.

No details were given as to what powers the QX80 Monograph but certainly Infiniti’s 400-horsepower twin-turbo 3.0-litre V6 would not be out of place here.