If the 2014 Jeep Wrangler Unlimited Sahara, 4-door/4-wheel drive model is on your radar, then you are already aware of its exceptional off-road skills, and in fact know that it would best thrive in some far-off desert, with an abundance of sand dunes for company.

However, not all buyers will take this big, no-nonsense SUV into its natural habitat, and if this is the case, rest-assured that when driving it in the city, the Wrangler remains one tough trooper.

Considering its heritage, we understand why the 2014 Jeep Wrangler has maintained its sturdy personality and off-road prowess, along with its hard-earned reputation as one of the best off-road SUVs available. Today’s Wrangler stems from years of history and development, with its roots tracing back to the Willys Civilian Jeep (CJ), a public version of the Willys Military Jeep (MB) from the Second World War until the 1980s. Like its predecessors, the 2014 Wrangler offers body-on-frame construction, rigid front and rear live axles, and the ability to drive without the doors. Plus high ground clearance can go a long way. 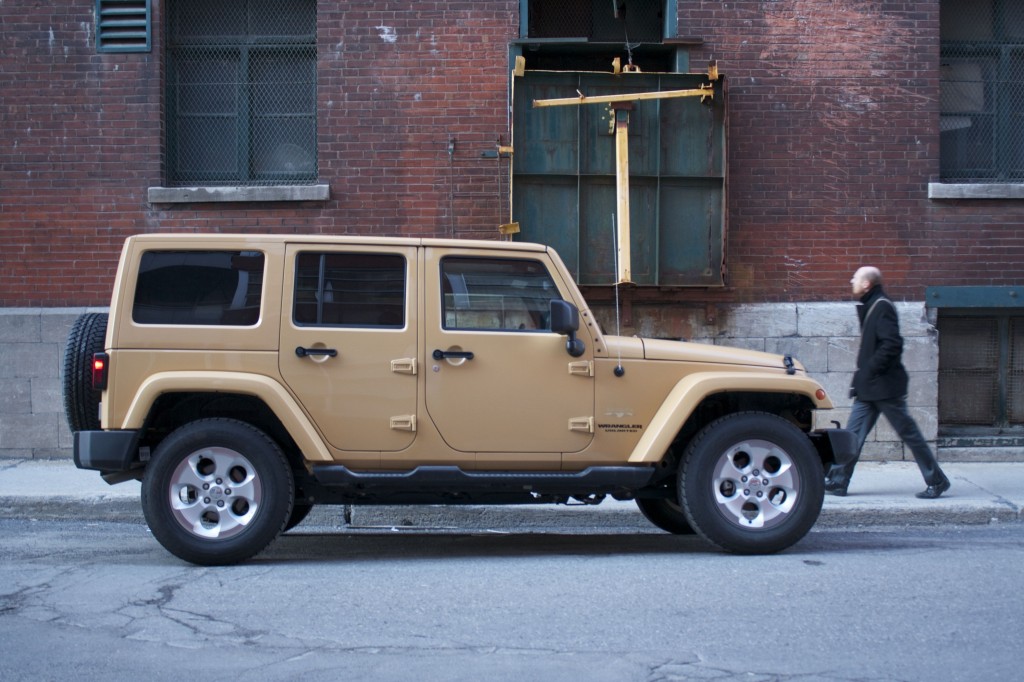 Under the hood, the 2014 Jeep Wrangler Unlimited Sahara 4-door 4×4 model comes equipped with a standard 3.6-litre Pentastar V6 engine, paired with either a 6-speed manual transmission, or an available 5-speed automatic. The engine pushes 285 horsepower and 260 lb-ft of torque, which is plenty of power for off-roading, and handling is neither too soft nor too rigid. The SUV is also equipped with a heavy-duty suspension.

Jeep’s compact SUV, happiest off-road, is great for the rocky slopes and sand dunes. That being said, many consumers purchase the vehicle without ever taking it onto a more challenging terrain. If this is the case, the Wrangler can be quite enjoyable if you relish the idea of a rough ride, and feeling every movement/ vibration of it.

The 2014 Wrangler produces quite a bit of noise, and you will feel every road imperfection. Side and rear visibility is not phenomenal either when the vehicle is not dipping or mounting hills at odd angles, but the feeling of invincibility that comes with driving this Jeep is incredibly appealing. Smaller vehicles will not even attempt to block you from entering a lineup towards the highway, and potholes definitely appear less threatening – those things are breakfast for the 2014 Wrangler, with the steep, rocky hills of the off-roading environment meant for supper.

On the outside, it is easy to understand why certain consumers are attracted to this type of vehicle. The 2014 Wrangler Unlimited Sahara is a nice-looking compact SUV, with the unmistakable family resemblance of past Jeeps. The vehicle’s history (what it stands for) really draws you in, as does its circular front headlights, large grille and wheels, boxy shape, and ability to remove the doors and rooftop.

Once inside, the vibe is similar, combining modern features and equipment with the hint of an old-school vibe. Standard equipment on the 2014 Unlimited Sahara includes steering wheel-mounted audio controls, air conditioning, and Uconnect 130, among others. You can also opt for elements like leather-trimmed bucket seats, heated front seats, Uconnect 730N for CD/DVD/MP3/HDD/NAV, and satellite radio, and a Max Tow Package valued at $575, and Connectivity Group worth $495, are available. 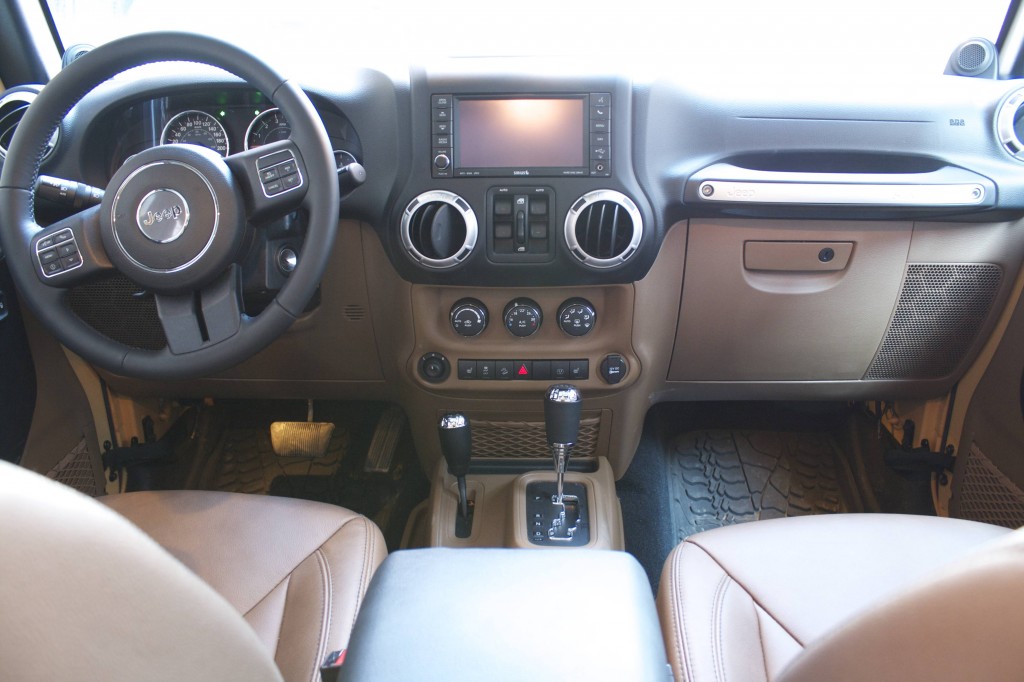 To buy or not to buy?

As a daily or semi-regular commuter car, the 2014 Wrangler Unlimited Sahara 4×4 will provide you with a noisy and bumpy ride, poor side and rear visibility, and hefty fuel consumption ratings. For example, after three days of driving the SUV, we managed a combined city/highway fuel economy rating of 14.7 litres per 100 kilometres over 90 km.

The good news is that you will benefit from a feeling of invincibility, and of course the added bonus of sitting high above the ground. The 2014 Wrangler Unlimited Sahara 4×4 also comes equipped with 4-wheel disc brakes, hill start assist, and traction and stability control, and 4WD should prove quite useful during the winter.

Finally, interior space should not be an issue for most front and rear passengers, although when it comes to seat comfort, backseat occupants should expect to sit on a somewhat stiff bench for the length or their journey. As for cargo space, it is best exploited when the rear seats are folded.

The 2014 Jeep Wrangler Unlimited Sahara 4-door 4×4 is an excellent vehicle to take off-road, and a pretty decent on-road SUV for those seeking the Jeep experience. The base MSRP for the Unlimited Sahara version is $33,795 MSRP, although pricing can tip the plus $45 scale with optional features and packages.